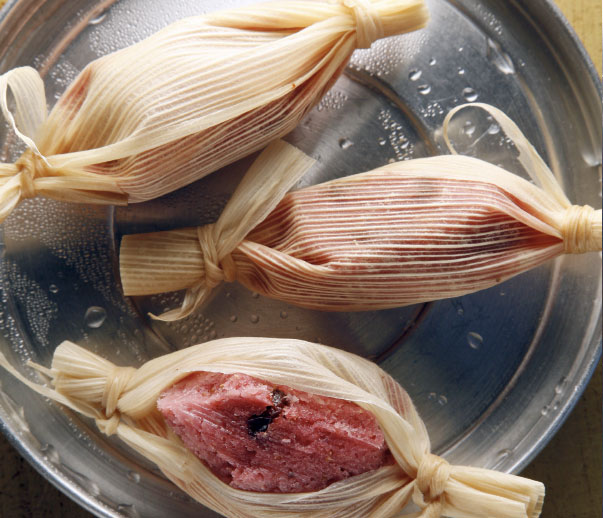 22 to 24 dried corn husks, soaked in warm water for ½ hour and drained well

When my mom drives from Mexico City to my sister’s house in Cuernavaca, she often stops along the way at a little shop devoted to tamales. She’ll pick up a few dozen light, fluffy, sweet tamales, their doughs infused with the flavor of fruits like strawberries. These are just the thing to bring out as a special dessert at a dinner party. Traditionally, these tamales are dyed with cochineal, the little bug that provided the world with red coloring, but twenty drops of red food coloring will do the trick.

★ Combine the strawberries, raspberries, sugar, vanilla extract, and orange zest in a medium saucepan. Set the pan over mediumhigh heat, let the mixture come to a strong simmer, and cook, stirring occasionally, until the berries are fully softened, 3 to 5 minutes. Transfer the mixture to a bowl, let it cool to room temperature, then blend it until very smooth.

★ Put the butter in the bowl of a stand mixer fitted with the whisk attachment. Beat the butter on high until it’s white, fluffy, and tripled in volume (it’ll look like vanilla icing), 7 to 8 minutes.

★ Combine the tamale flour and 2¼ cups of water in a large bowl and mix with your hands until you have a homogenous dough.

★ Reduce the mixer speed to low. Add the powdered sugar, baking powder, and salt to the butter, then mix on medium-high speed for 1 minute or so.

★ Alternately add the dough, 1 Ping-Pong ball–sized piece at a time, and some of the berry puree until you’ve added them all. Keep beating, occasionally scraping down the sides of the bowl, until the dough looks fluffy and light, 5 to 8 minutes. Add the dried cherries and food coloring, if using it, beating just until well incorporated.

★ “Candy-wrap” and steam the tamales according to the instructions on page 103. They’ll take about 1 hour to cook.