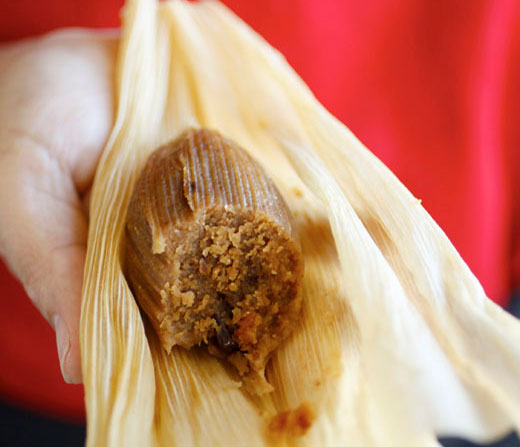 These unusual sweet tamales from Mexico’s Gulf Coast, flavored with anise and studded with raisins, were a specialty of my grandmother, one of the three varieties of corn-husk-wrapped treats that she’d make for us when I was little. From the Nahuatl word tetl, meaning “stone,” their name refers to their shape (less oblong than round) and their deep brown color. Like that of any fine European cake, the secret to their deliciousness is sugar and fat, in this case, piloncillo and a combination of lard and chales (the crunchy bits left after cooking carnitas). They’re rich and wonderful.

★ Combine the piloncillo and aniseed with ½ cup of water in a small pot. Set the pot over medium heat and bring it to a strong boil, stirring and breaking up the piloncillo until the piloncillo melts. Take the pot off the heat and use a spoon to smash any remaining chunks of piloncillo. Let the mixture cool to room temperature.

★ Put the lard in the bowl of a stand mixer fitted with the whisk attachment. Beat the lard on high speed until it’s white and fluffy, like vanilla icing, 7 to 8 minutes.

★ Reduce the mixer speed to low and add the tamale flour, a cup or so at a time, and the baking powder and salt. Gradually increase the speed to medium and keep beating until the lard and tamale flour have been beaten together for about 5 minutes.

★ Add the chales and continue to beat on medium until well distributed, then add 2½ cups water, 1 cup or so at a time. Keep beating, stopping occasionally to scrape down the sides of the bowl, for about 10 minutes.

★ Pour in the cooled piloncillo mixture in a steady stream, and beat for about 3 minutes. Add the raisins and beat just until they’re well distributed.

★ “Candy-wrap” and steam the tamales according to the instructions on page 103. They will take about 1 hour to cook.